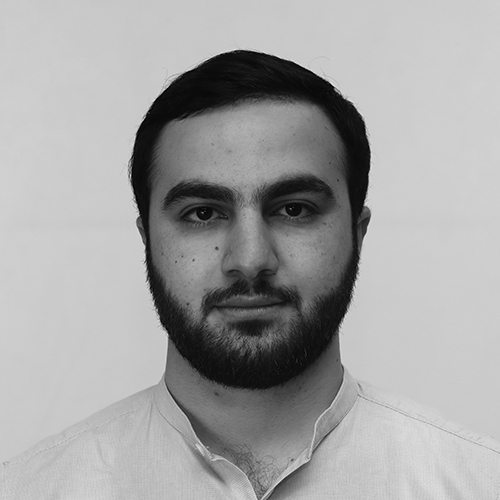 Economic relations between Armenia and Qazaqstan

In 1995, the trade volume between Armenia and Qazaqstan amounted about $3 million. The main share of Armenian exports accounted for machinery and equipment, electric motors and generators, pharmaceutical and textile products. Qazaqstan mainly exported rolled products, conveyor belts made of volcanic rubber, agricultural products and non-alcoholic and alcoholic beverages. In the same year, the Republic of Qazaqstan and the CIS countries signed an agreement “On the principles of trade and economic cooperation” [2, С.72]. In 1996, during the visit of the Ministry of Economy of Armenia’s delegation to Almaty, the following projects were discussed and initialed with Almaty: “On Free Trade”, “Non-Trade Payments”, “Mutual Protection and Encouragement of Investments” [2, С.87]. In 1997, an agreement was signed between the governments of the Republic of Armenia and the Republic of Qazaqstan on the principles for elimination of taxation during export and import [3]. However, all the above-mentioned agreements and treaties did not caused a sharp increase in bilateral trade, the volume of which from 1996 to 1998 was permanently less than $3 million.

For almost three decades a sufficiently high level of military-political, trade-economic and cultural-humanitarian dialogue has been established between Armenia and Qazaqstan, however, it isn’t yet possible to use the full potential in trade and economy. At the same time, based on the dynamics of bilateral trade between Yerevan and Nur-Sultan, we see that only short-term effect has an impact on mutual trade, and the decline in trade turnover occurred in economically favorable years. Obviously, there are objective reasons for mutual nature that affect the profitability of export-import operations between Armenia and Qazaqstan, which aren’t dependent on world economic processes. Let’s look at the dynamics of Armenian-Qazaqstani economic relations from 1995 to 2014 (see Chart 1). 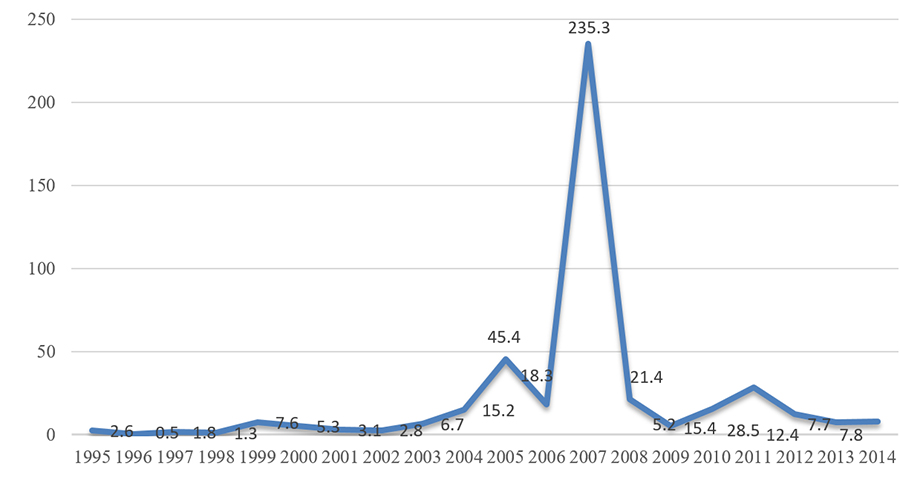 Dynamics of Armenian-Qazaqstani economic relations from 1995 to 2014 (in US dollars, million)

As we see, a sharp increase in the volume of bilateral trade accounted for 2003-2007 due to the supply of liquefied gas from Qazaqstan. However, in 2008-2009 commodity turnover between the two countries sharply decreased, as it became difficult for Qazaqstani exporters to compete with their Russian counterparts. Let’s take another example: a significant increase in turnover was noted in 2010-2012 (due to the supply of wheat from Qazaqstan), however, it’s known that Russia is one of the main leaders in the export of these products in the world market, so another decline in the volume of Armenian-Qazaqstani trade in 2013 was due to the fact that Nur-Sultan exporters again failed to withstand a competition with Moscow.

We will single out the main reasons, which constrain the development of bilateral trade and economic relations between Armenia and Qazaqstan:

The above-mentioned examples of ups and downs in trade volumes between Armenia and Qazaqstan show that competitive prices may also be attributed to destructive reasons for Russian analogues of Qazaqstani goods: liquefied gas, grain and metal products. Even excluding transport costs, a number of Qazaqstani goods with export potential are uncompetitive, or their implementation has low profitability in the Republic of Armenia. Under such conditions, it is difficult for Qazaqstani producers to compete with Russia, supplying similar products to the Armenian market.

Armenia's accession to the EAEU

S ince 2015, after Armenia’s accession to the EAEU, there has been a gradual increase in turnover between Armenia and Qazaqstan (see Chart 2). 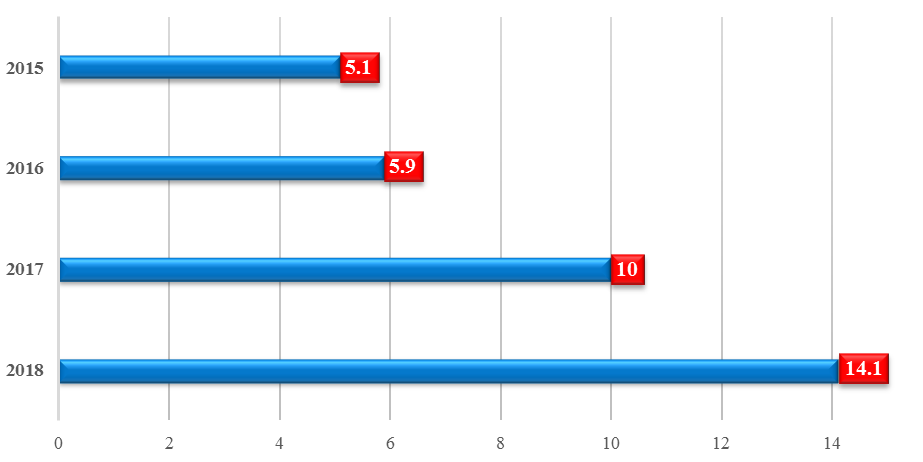 Armenian-Qazaqstani  turnover volume after Armenia’s accession to the EAEU (in US dollars, million)

However, Russian exporters have price advantages in the supply of grain and fuel products to Armenia. Qazaqstani exporters have to overcome the territory of Russia, which is not cost-effective for the Armenian side, as the latter buys the same goods from Russia. Thus Qazaqstan's exports to Armenia in 2018 are represented only by rolled (flat) iron, iron bars, plastics and a small amount of agricultural products. (see Chart 3). The main part of the Armenian export to Qazaqstan is the supply of alcoholic and non-alcoholic beverages, jewelry and tobacco products, medications and a small quantity of building materials (see Chart 4).

In May 2015, the first Armenian-Qazaqstani business forum was held in Yerevan, which was organized by the Chamber of Commerce of Armenia and the National Agency for Export and Investment of the Ministry of Investment and Development of the Republic of Qazaqstan. Armenian and Qazaqstani businessmen, who managed to get enough information about the investment climate of the two countries and opportunities for cooperation, initiated a dialogue in B2B format (“business to business”). 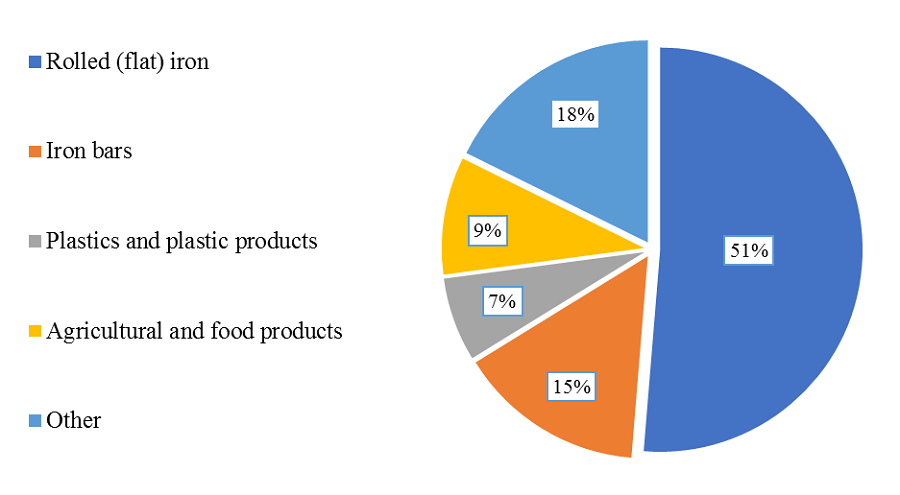 The structure of Qazaqstani exports to Armenia in 2018

Qazaqstan sees opportunities for cooperation in almost all areas and is ready to offer the Armenian consumer a wide range of services and goods: in engineering industry, food industry and in chemical products. Armenian manufacturers are also open to implementation of joint projects. Currently, the activity of enterprises with Qazaqstani capital is very low in Armenia, except the activity of PLL SCAT Air Company, which since January 2019 has temporarily suspended direct Nur-Sultan-Yerevan-Nur-Sultan flights. The situation is different with the Armenian capital in the market of Qazaqstan. Over the past three years, the number of small and medium-sized enterprises formed by citizens of Armenia has more than doubled in Qazaqstan (to 145). Deputy Chairman of the National Agency for Export and Investment of Qaznex Invest, M. Mikenov, in one of his interviews said: “The turnover between Qazaqstan and Armenia leaves much to be desired and doesn’t meet the parties' requirements, as there is a more serious potential. Nur-Sultan and Yerevan are ready for closer cooperation in various fields” [8]. He points out that we need to work on the development of cooperation between the two republics, especially considering the EAEU, which provides great opportunities for cooperation within the common customs area with a large market, the possibility of free movement of goods, human resources and capital.

At the moment, we have to indicate that even remittances sent by Armenian citizens engaged in labor activities in Qazaqstan are three times higher than the volume of trade between the two republics, reaching almost $19 million by the end of 2017 [4]. By the way, Qazaqstan is among the top three countries that are the leading sources of cash transfers for Armenia.

Structure of Armenian exports to Qazaqstan in 2018

Citizens of Armenia  in Qazaqstan are in the field of construction, services and trade. It should also be noted that most of the individual enterprises of Armenian citizens in Qazaqstan have been launched with the active support and assistance of the Armenian Diaspora of Qazaqstan. Among large companies, the dealer network is represented, for example, by the Ararat brandy factory of Armenia. A certain interest in Qazaqstan is also shown by jewelry companies from Armenia. The above-mentioned data on remittances indicate that citizens of Armenia and Qazaqstan already use privileges from the EAEU, related to the general labor market and the free movement of citizens within a single economic space, but such a low turnover between the two republics, which are part of the same economic integration space, generates some concern.

W e believe that the main obstacle preventing the growth of trade and economic relations between the two republics remains lack of optimal transport routes between Yerevan and Nur-Sultan. 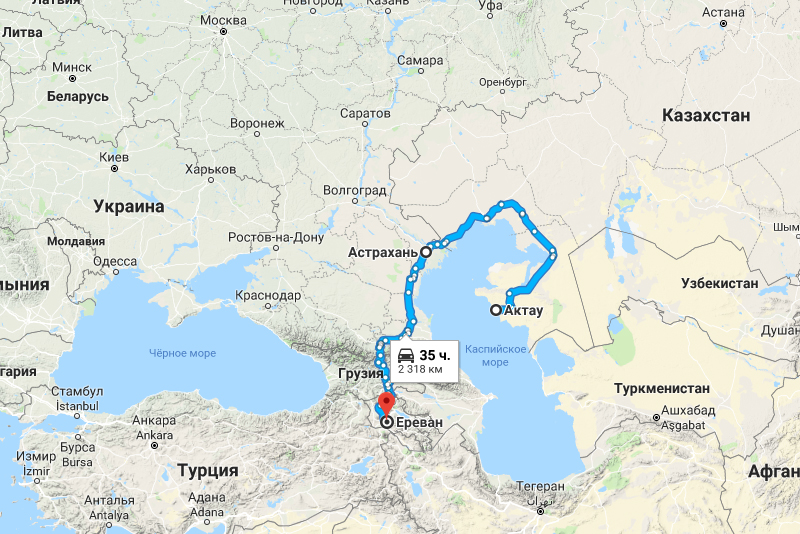 Currently, goods from Qazaqstan arrive in Armenia mainly through the loaded route through the Upper Lars checkpoint, Russia (see Map 1), which is almost 500 km (4 hours) shorter than the route "Aktau-Turkmenbashi-Tehran-Yerevan" (see Map 2). Moreover, it is necessary to take into account that goods will pass through the territory of two states (Turkmenistan and Iran) that aren’t EAEU members. After the opening of a direct auto-ferry service on feeder ships from Aktau (Western Qazaqstan) to the Iranian port of Bender-Enzeli on October 2001 (hereinafter referred to as the road route to Armenia), a new opportunity arose for travel of heavy trucks and containers from Qazaqstan to Armenia. However, the complex transport logistics of the Syunik region of Armenia and excessive loading and unloading operations make it difficult to implement transportation along this route. Other transport routes, for example, through Georgian territory don’t function due to the closure of the railway communication through Abkhazia, and the existing difficulties in Georgian-Russian relations do not alleviate problems of establishing freight traffic through the Upper Lars Pass. Transportation of goods along the above-mentioned existing routes leads to high transport costs for both Qazaqstani and Armenian goods, significantly reducing the profitability of import-export operations between the two countries [1, С.34].

In our view, the rapid and stable development of Armenian-Qazaqstani trade and economic relations in long-term perspective is possible only in case of construction of a railway connecting Armenia and Iran. In future, Armenian-Iranian branch of the railway will connect with a longer branch: "Tabriz-Tehran-Gorgan (Iran) - Etrek-Bereket-Gyzylgaya (Turkmenistan) - Zhanaozen-Aktau (Qazaqstan)". 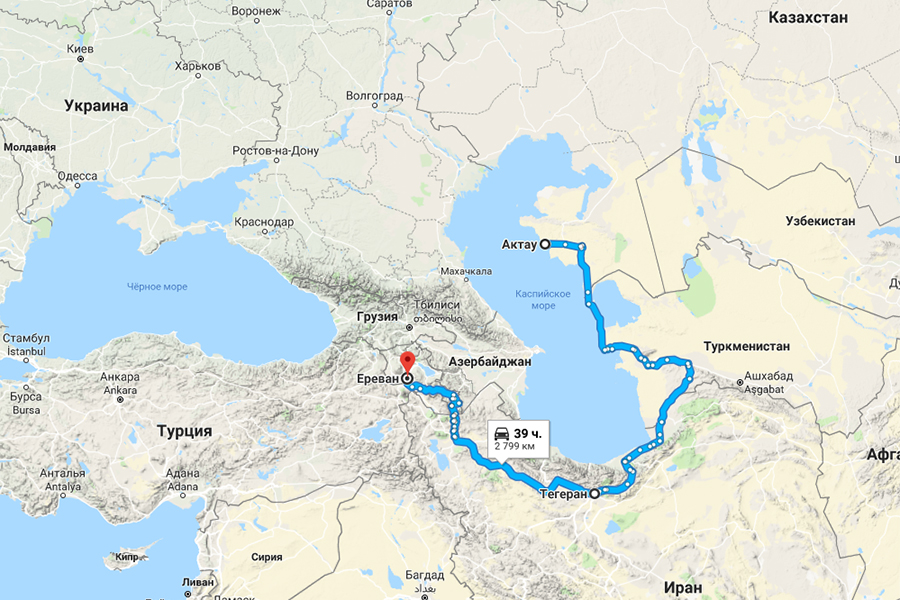 This railway has a strategic importance, because it will connect Yerevan not only with Tehran, but also with all the countries of Central Asia. Moreover, the presence of such a route will radically change the significance of Armenia for the Chinese “One Belt, One Road” project. The total length of the route will comprise 2,800 km. With an average speed of a freight train of 45 km/h, this route will be covered in less than 3 days. Taking into account the potential volume of cargo transportation along such a route, the economic indicators of Armenia will begin to rise rapidly along with the level of welfare of the society.

As a conclusion, Armenia’s entry into the EAEU gave a positive impetus to the revival of trade and economic ties between Yerevan and Nur-Sultan. Undoubtedly, there is sufficient potential for the development of economic relations. Analysis of the statistical data on export-import of Armenia and Qazaqstan indicates that there is a niche in the Armenian market, which, other favorable circumstances, may occupy Qazaqstani products. In its turn, Armenian exporters also have products, which can consistently fill the Qazaqstani market. The Republic of Qazaqstan is an attractive area for SMEs to be run by citizens of the Republic of Armenia, which is facilitated by the presence of favorable conditions for entrepreneurship in Qazaqstan, as well as economically active Armenian Diaspora. The accession of Armenia to EAEU opens the Armenian market for all member countries of the Union, including Qazaqstani businessmen, who can enjoy the privileges of EAEU, since the presence of two states in a single economic union provides an exceptional opportunity to develop and deepen trade and economic cooperation.

[3] Historical and Diplomatic Archive of the Ministry of Foreign Affairs of the Republic of Armenia, List 2, Case No. 214

[6] “Agreement on the principles of trade and economic cooperation between the Republic of Qazaqstan and the Republic of Armenia in 1993”. Almaty, 19.01.93. Entered into force upon its signature.

[7] Prospects for the economic relations development between Armenia and Kazakhstan, http://www.noravank.am/rus, 10.03.2019